Hey, all! Carrot here! And it's that time again! The time where I word-vomit weird things and everyone reading gets exponentially more worried about my psyche the further they get down the page. But I promise, you'll like it this time! Because I'm getting so c l o s e to the next release that I can practically taste the Building Dread scintillating between the tendrils of your consciousness. What am I talking about? Well, I'm talking about—

Yes, Arc 2, the next chapter in the saga of Iggy's spiraling descent into HELL.

Well, not really, but close enough.

So, Arc 2, what's it all about? Arc 1 represented the "standard" Our Wonderland story—essentially, what happens the first time Iggy traipses into Wonderland, what happens if Iggy doesn't do anything to try and change the horrific events that happen in Wonderland, and so on and so on. But if you've played Arc 1 (and I hope you have because otherwise none of this is likely making a lick of sense), you'll know that for Some Reason the events seem to be looping themselves, giving Iggy the opportunity to try different things. Not that Iggy really knows this is happening, so mostly he just waffles around, but you know, it's the thought that counts.

Arcs 2 through 4, then, are some of Iggy's attempts to get closer to his friends and figure out why the hell they're going off the deep end (besides, well, the wish-fulfilling Wonderland they've just been transported to). This (n a t u r a l l y) leads to different outcomes from the standard path. At least right now, I see the themes of these three arcs as being something like:

Then, of course, there's Arc 5, which will have the theme Fucked Up Beyond All Reason. (Not really, it'll actually be like ~ forgiveness ~ or something boring like that, but let's just pretend.)

At any rate, each arc begins with a new Event™ that changes something in Iggy just enough to begin shifting around the rest of the events that follow to varying degrees (and forcing Iggy to come to terms with different aspects of himself, to boot). Since Arc 2 is the "Call Genzou" arc, it dives into the relationship between Iggy and Genzou, essentially presenting a possibility for "one route" (to use dating sim terms lol) Iggy could take in his life were he to pursue it. You'll also get to learn more about Genzou, his life and past, his secrets-that-honestly-aren't-really-secrets-because-let's-be-real-Iggy-is-just-oblivious, and, you know, fun stuff like that.

But enough about that. The whole reason you're reading this devlog is because it says "Progress Update," so I need to give you a progress update.

The progress update is that Arc 2 is VERY CLOSE to completion! Let's look at some stats: Tbh, I'd already made decent progress on Arc 2 before even launching Arc 1—the main bulk of the text was written and I'd already drawn a number of CGs. So this past month and a half has mostly been writing dialogue choices and death scenes (since I always save those for last) and drawing new CGs I've inexplicably and suddenly realized I needed.

Death scenes! Let's talk about the death scenes for a bit (because this is a horror game after all, right?). There will be four new death scenes, and for some reason, they're all like... so much more complex than the ones in the first arc (I say as an excuse for why they've taken me so long to write). Some of them are a result of Things Happening Differently Thus Resulting in New Ways to Die, while others are knee-deep in new scenes that Fuck Iggy Up™. For this reason, you'll get to experience some new choices in familiar spots:

Also for some reason the death scenes in this arc seem a lot more painful than in the previous arc, but maybe that's just me. 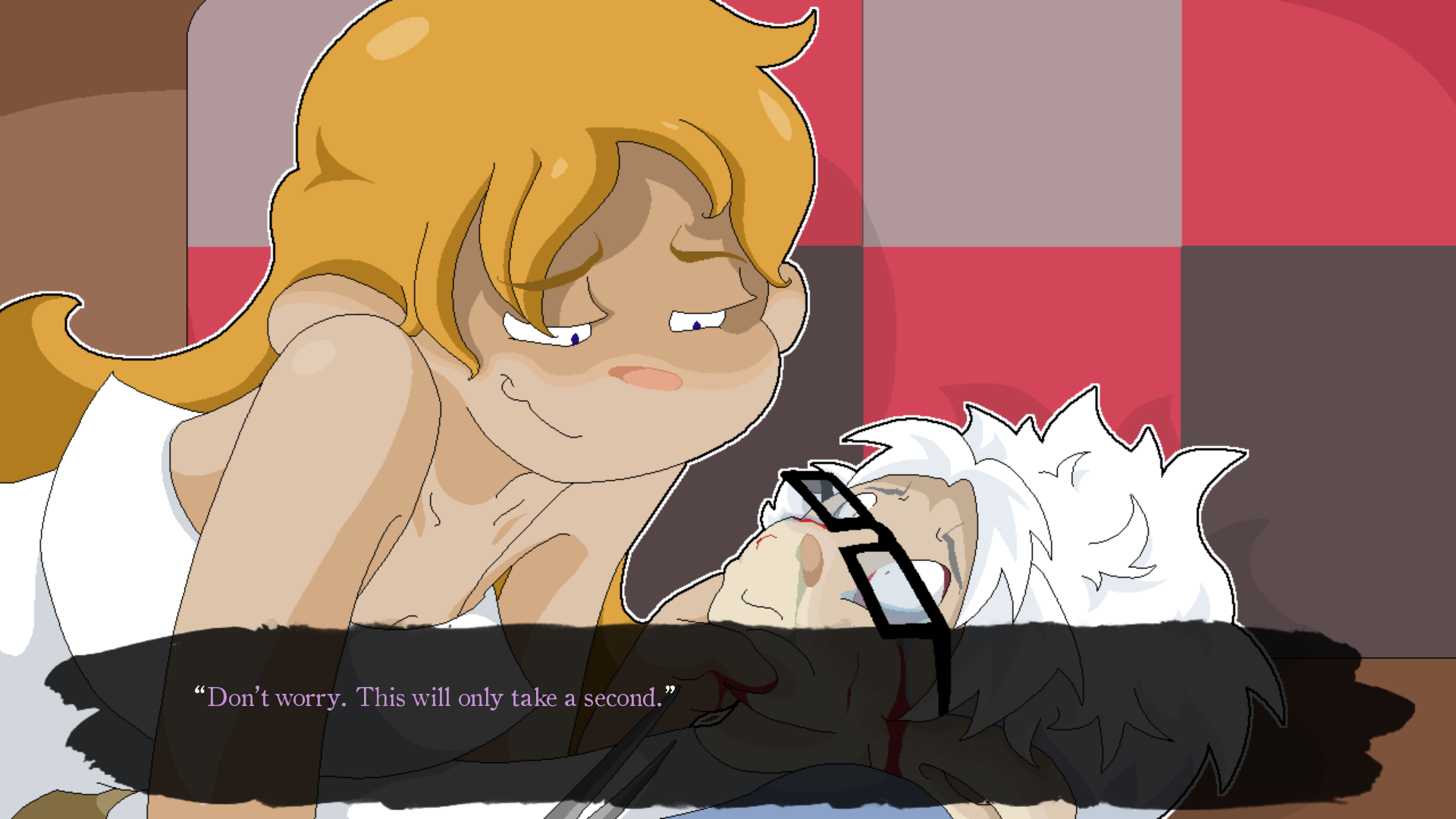 Btw did I mention that my other name for this arc is The Arc Where Iggy Goes Through a World of Shit?

There are also, of course, a lot of new dialogue choices. While most dialogue choices don't have too much effect on the course of the events in each individual arc (though there is a little bit of that in this arc), they'll greatly affect the ultimate end of the game, leading to unique scenes in Arc 5, as well as changing how the epilogue plays out. As you might imagine from an arc focusing on Genzou, most of the dialogue choices revolve around him, so, uh, if you like Genzou, then git gud. I'm not sure either, Iggy.

So, when will all of this depravity actually be finished so you can play it? It's a good thing you asked, because that's the next section.

Within the next month or so!!

But Why Is There No Exact Date

Because in this tumultuous world, there are no absolutes. And because I'm a poor overworked solo dev with no time management skills and a full-time job. And who knows what could happen in the next months?? There's a pandemic still going on??

At any rate, serious here, I hope to finish up the last bits of art and coding within the next few weeks, after which, I'll be sending the new update out to beta testers (even more critical than last time since I need to ensure all the save-transfer-y stuff works and there aren't any issues with persistent data-y stuff). After that, of course, there might be some fixes to make, but barring any large issues or Sudden Life Changes, "within the next month or so" feels like the best estimate.

On the subject of beta testers, I already have my testers from Arc 1 that I'll be reaching out to again, but if anyone else also has any interest, feel free to hit me up! You'll just need to have played Arc 1 already given that the choice to start Arc 2 comes at the end of Arc 1 (also it wouldn't make any sense otherwise so why would you even want to play it if you haven't played Arc 1...)

And that's it! Not sure I'll have another devlog before the Arc 2 launch, but as always, you can find more granular updates and progress reports over on my Twitter. Speaking of Twitter, I also love distracting myself from actual work on the game by drawing and posting tons of extra (and often ridiculous) art of the characters. So have some parting art: 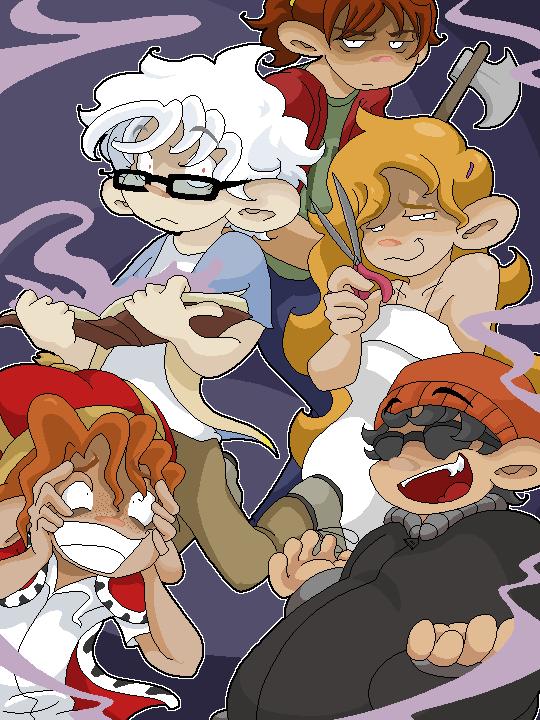 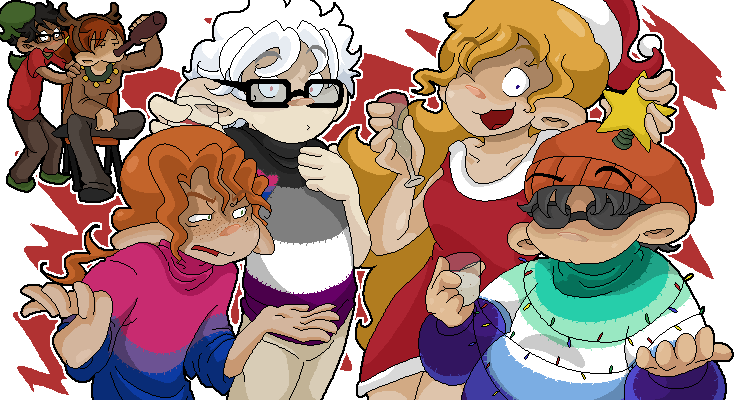 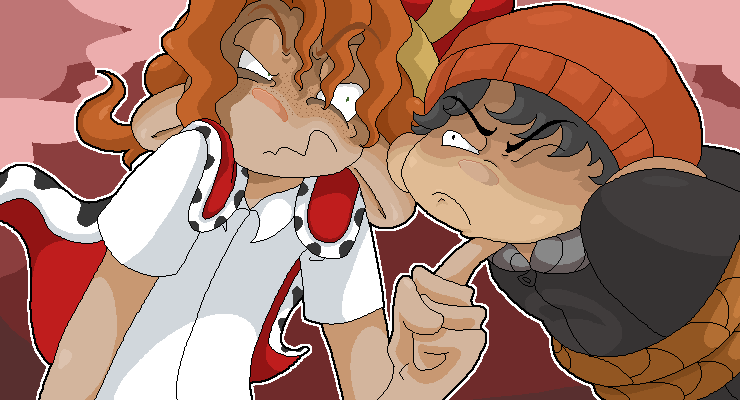 Oh, and on a completely separate note, given Iggy is the main way the player experiences and interacts with the world of Our Wonderland, I feel like the more spread-out look of the new game cover, while it does convey the basic ideas behind the characters, doesn't quite fit the game. Despite the book seeming, at the point, like it isn't some Lovecraftian tome like the Necronomicon, I feel like some of the art produced for official Lovecraft video games might provide a good basis for a better cover:

Like, and this is my non-artist, fickle brain kicking into overdrive, I can easily see Iggy with the Book in the center, and the rest of the cast surrounding him, like they come from the Book. For those who've played the game, they'll know the not-Iggy characters don't actually come from the Book, but are, should they so desire, enabled by it. (And yes, I didn't forget the post mentioning Iggy's choice in friends to hang out with will influence his desires. ;) )

Oh, yeah, the new cover image! Tbh, I drew it a bit on a whim because it seemed like the old cover image didn't seem to be giving me a whole lot of traction on itch, so I wanted to experiment with something I felt was a bit more dynamic and perhaps eye-catching on the search page. But I will probably continue to keep experimenting with it as I keep working on the game/releasing new arcs. Those are great ideas and references! I hadn't really thought about a Lovecraftian-esque take on it before. That's def something I'll look into when I inevitably redesign it once again and try for something new!! Thank you! :)))

Looking forward to Chapter 2 in terms of gameplay and expansion of the story. Though given the hints towards Chapter 5, both intentional and unintentional (seriously, dev, check your published RenPy assets - spoilers be there!), really looking forward to what seemingly is shaping up to be "The One Where Everyone Remembers the Time Loops" and Orlam's depravity and control-freakishness being driven to their logical extremes.

Yeah... erm, I wasn't great about deleting unused/upcoming images from the images folder in the game. Mostly because it's wildly unorganized already, and also I assumed most people wouldn't care enough to actively try to get into the archive file (apparently that was an incorrect assumption though LOL). I did at least delete non-Arc 1 music files and Aseprite files to save on space haha.

I will make a point of cleaning things up better for the Arc 2 version when it releases though. For the time being, consider it a prize spoiler LOL Though to be honest, some of the stuff I've already drawn for future arcs (past Arc 2, at least) that's present in there is more of sketches to test out/cycle through ideas in a visible format and/or something that will likely be redrawn later to be better once I actually reach the part of the game in question. So it might end up that some of those won't actually be used in-game (though the final assets would likely be somewhat similar)

I'm very glad you're still looking forward to the future arcs though even after the unintentional spoilers!! Though now I only hope I can live up to your expectations hahaha. Thank you as always for your kind words and support (and for kicking me into gear about my assets lol)!

Awesome!! Excited to finally play the next arc

Ahhhhh, thank you very much!! :D