Avast! 'Tis I, your favorite scurvy Carrot! And I be here with-... OK, that's about enough of that. HEY, PEEPS. It has now been nearly 1 WHOLE MONTH since the release of Arc 2. And that means—! Well, it doesn't really  mean anything, but I'm writing a devlog anyway, since I'm making good headway on Arc 3 and figured that means it's about time I give a Carrot Status Report™.

A celebration is in order—because last week Our Wonderland officially reached 300 downloads!! This is a big milestone for a little carrot like me, and I just wanted to take the opportunity once again to thank everyone for all their support! I hope you'll continue to  stick around as I stay hard at work on the rest of the a-a-arcs.

Here's some art I drew on Twitter to celebrate the occasion: 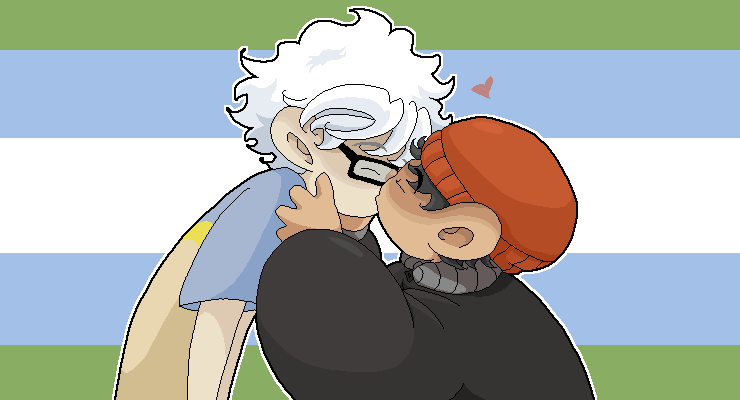 This was definitely not just an excuse to draw a Genzy kiss.

AND NOW FOR SOMETHING COMPLETELY DIFFERENT.

Because Arc 3 definitely won't have any Genzy kisses. M-m-more like Genzy tRaUmA. And every other type of trauma. In fact, it's pretty much a messed-up slip-n-slide straight to hell.

This past weekend, I finished writing  Arc 3 (currently sitting at around 35k). Well, most of it. I won't be adding choices and death scenes until later after I've finished coding everything. And also I tend to like... tweak and twerk stuff to death while coding it. I will likely also realize I dEsPeRaTeLy nEeD some new scene along the way, as well. BUT STILL. The bulk of the writing work is done, which is great, as now I feel like I can actually talk about it without worrying that something might majorly change (and also I can start working on New™ and Not-Horrific™ art for it).

F-f-find out where Orlam lives???

One thing I enjoy about the way I work (i.e., a chaotic, unorganized mess) is that I often end up surprising myself during the writing process, and it was no different with Arc 3. Though I've had the main story beats bumbling around in my head for it since last fall, I didn't know exactly how they would play out—nor how all the in-between stuff would work out. And to be honest, I was super surprised (and dIsTrAuGhT) by all the new things that ended up slipping in there while I was writing (and sometimes even like... random story connections I didn't even realize I was making). This gave me a renewed burst of motivation and excitement, so I'm pretty P.U.M.P.E.D. to start working on art and share more stuff about it.

Whereas Arc 2 focused on Iggy's jocose bestie and confidant, Genzou, Arc 3 will focus on everyone's favorite rattailed cannibal, Orlam. How might Iggy's descent into Wonderland change if he were to call Orlam first? H-h-how might Iggy's psyche be twisted upon learning more about Orlam's circumstances? AND HOW MIGHT WONDERLAND TAKE ADVANTAGE OF IGGY'S NEWFOUND RAGE???

(Note: My personal subtitle for this arc is "The One Where Iggy is Mad All the Time," if that gives you any indication.)

This arc was both difficult but also fun for me to write because of how different it is from Arc 2 (and because of Genzy being my Light in Dark Places™ the past few weeks). But at the same time, Arc 2 also influenced how some parts of Arc 3 turned out. I think this arc dives even deeper into some of the relationships between the members of the group, not only Iggy and Orlam, since that's kInDa tHe fOcUs, but also Genzou and Orlam, Iggy and Gidget, and yeah, there's more Iggy and Genzou complications in there, too (m-more than I expected, tbh). I admit I  definitely have too much fun sprinkling in Hints and Clues about all of them throughout the main story without trying to reveal too much all at once. I really hope it'll end up making everything more satisfying by the time I reach Arc 5. This arc will also finally give everyone a chance to see more of Orlam's castle and his life in Wonderland, which was a blast to write. And, of course, there will be plenty of flashbacks again, because everyone's favorite ratman was once a sweet and pathetic ratboy that makes me want to WEEP.

Honestly the biggest thing I'm worried about now is that people are gOiNg tO hAtE mE after playing this arc because it goes in some... well, some interesting directions that you might not expect (especially after playing Arc 2). Then again, I have no idea. I don't know what people are expecting at this point (besides a wild ride). So who knows. I just hope people will enjoy the little messed-up bundle of freckles that is my My Dear Droopy-Eared Ratman in all of his q-q-quirks.

Oh, right! I've decided to submit Our Wonderland to the Queer Games Bundle that'll be taking place in June! So that's pretty exciting. I've always wanted to join a bundle and this one sounds super neat and an awesome opportunity to add some Sweet™ and Cool™ ace rep to a bunch of other amazing queer gamezzzz. At any rate, be on the lookout for that. It'd be a-a-amazing if I'm able to release Arc 3 by then, but we'll have to see, as I can't always predict external factors like CRIPPLING DEMOTIVATION and days where I am Le Sad. BUT THAT DOESN'T MEAN I CAN'T TRY.

All right, I think that should finally be about ittttt. I can't think of anything else to word-vomit, at least, so I guess that means I should stop this devlog here. And since this devlog was mostly about Arc 3 and Orlam, I'll leave you with some Orlam art. Until next time!!

He's sexy and he'll eat you and he's a horribly-broken man! Orlam's Wild Ride is Coming Soon TM and you can't stop the carrot!

RIP AND TEAR, IGGY, UNTIL WONDERLAND IS YOURS.

Seriously, though: take care of yourself, Carrot! It's worth it.

I CAN'T BE STOPPED except to sleep LOL

But I digress; thank you so much for the kind words!! *weeps* I'm so glad people are looking forward to more Orlam hahahaha. I feel like I'm always so nervous about each new arc hoping people will still like it. I-I-I WILL TRY TO TAKE CARE OF MYSELF.

That last one looks like Orlam is posing for one of those "Hot Babes In Your Area!" 90's ads. Heck, I even made an animated GIF for the concept - 800x600 (technically skinnier because of some transparency usage on the side), optimized for those who didn't have a fancy 55.6K modem back in the day, and replacing the rainbow colors with the character-appropriate ones (I hope).

THAT'S THE BEST THING EVER S-S-SEEN

WHY DOES IT WORK SO PERFECTLY

Down on your knees before the Rat King!!!

Or else you'll lose your head...

...along with other various body parts LOL

We could make a meme song LOL

We Don't Talk About Orlam™