Arc 4, 900 downloads, rattails, and more! (also did I mention rattails)

A jolly summer Monday to all my Wonderland besties! Hope you're staying cool and not dead as the warbling heat of the sun rises to Steak-n-Bake levels in these cruel infernal months! (I don't know if it's clear, but I don't especially like summer.) (I am an autumnal carrot.) (I wilt in the heat.)

Anyway, I'd been meaning to write up a devlog for a little while now just with like... wrap-up stuff from the Arc 3 launch, current progress updates, random scattered bits of tangential info... but I kept putting it off because I'm a Grade-A laze/procrastinator and kept telling myself I'd do it tomorrow. Well. That tomorrow is finally today! So let's get right to it!

I hope everyone enjoyed the  delightful experience that was Arc 3! Considering I was going into the launch questioning everything about it and all the decisions I made, I was quite elated by the positive response . The ratman is such a near and dear char to me, so seeing so many people showering him with love filled my little carrot heart with such j-joy .

UMMM. Oh yes, The Game has surpassed 900 downloads! This in itself wasn't particularly eventful; HOWEVER, it does mean that we've somehow hit the home stretch towards reaching 1000?? H O W I S T H A T P O S S I B L E ? ? ? I feel like it was only yesterday that I drew the 500 downloads Celebratory Art of Beachy Frivolity, so to now be almost twice that in only a few months is literally melting the bones off my body. That also means that the new Arc 3 version of the game was downloaded almost 350 times!  At any rate, now I need to start thinking about i d e a s for a potential grand 1000 downloads act of pageantry. Hrm... unsure atm. If you have any ideas, let me know. Otherwise, I'll probably just draw something Special™ and Cool™ ig??? 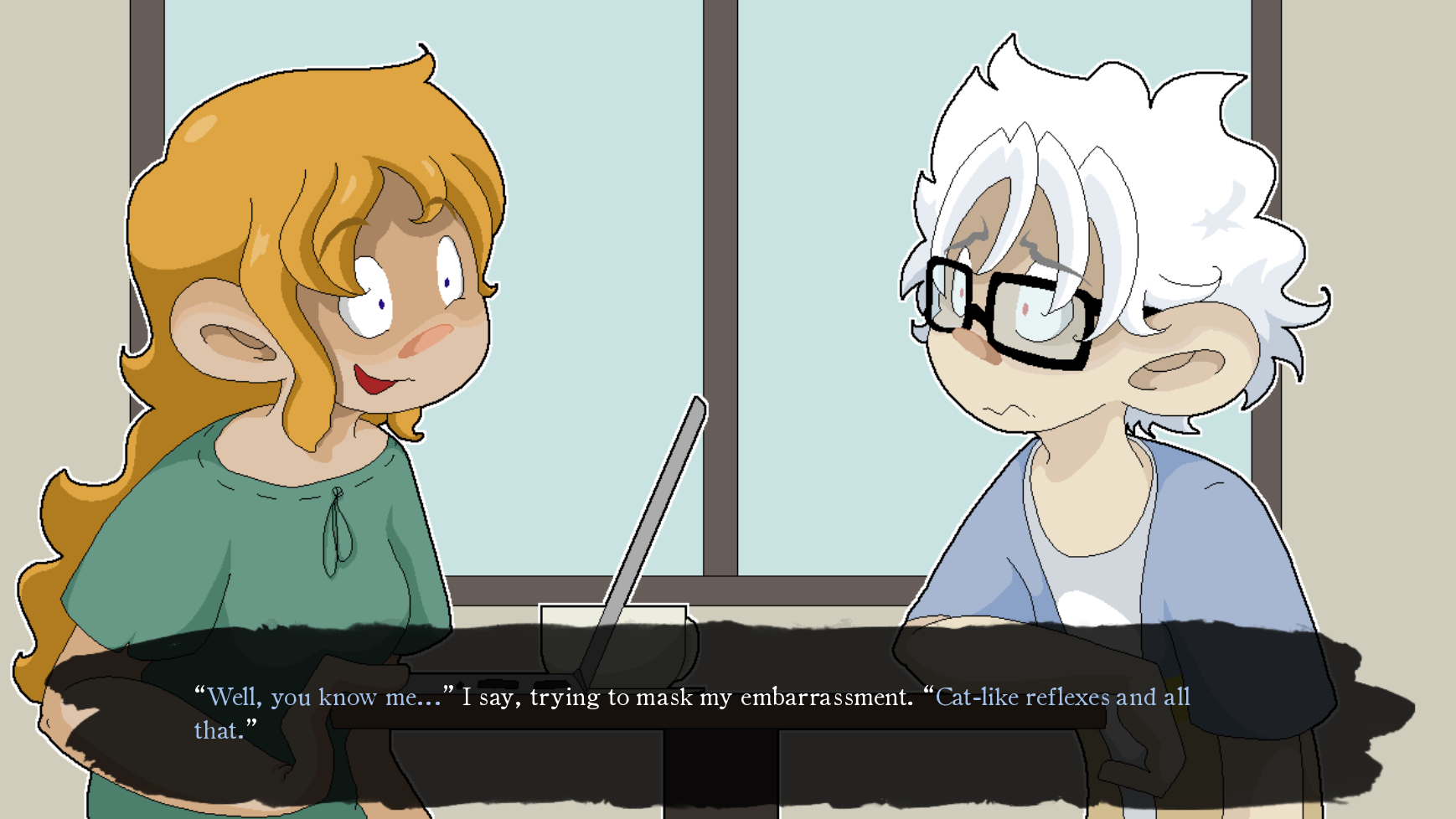 Iggy, the suave debonair, as usual.

But of course we must talk about Arc 4! Is it the next arc, after all, and production is already well under way! LET'S LOOK AT SOME NUMBERS:

Sweet. But what does this actually mean from a tangible perspective? Like a third of the way through with everything I guess?? Though writing-wise, if I go by the average word count of prior arcs, I'm probably half-way / a little over halfway done. Art-wise, though, I of course have to consider the eventual ending sequence, which always takes longer to do, w e e p... 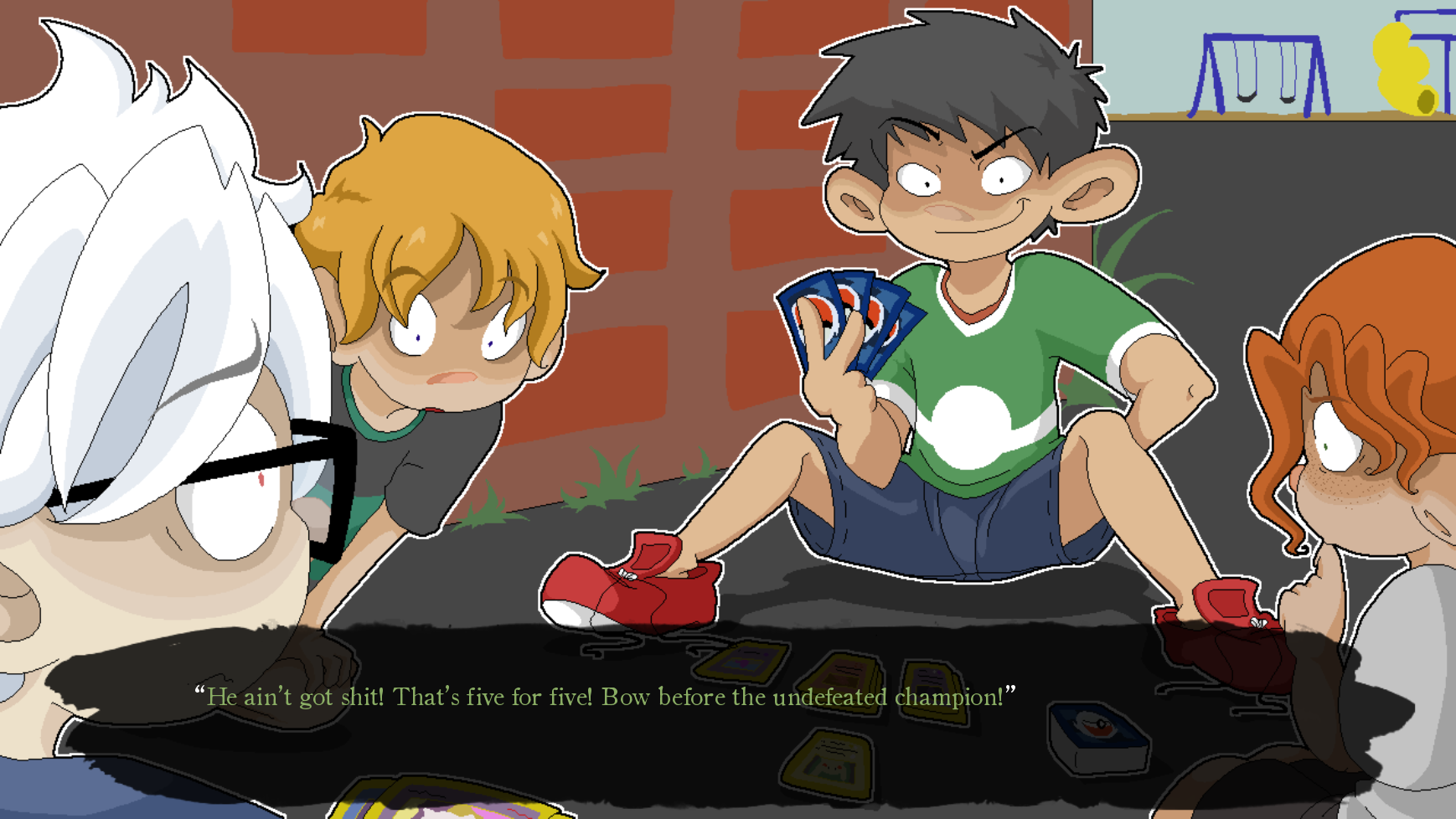 ...just realized I haven't even really talked much about Arc 4 yet, have I? WELL. Obviously, the main focus of this arc is Gidget. What would happen if Iggy called Gidget before traipsing into Wonderland?! Though because of the way each arc has been building off of each other, this arc is also turning into, like, the Grand Culmination to a certain series of flashback scenes that have been popping up in each arc. And since this particular flashback revolves around all four members of The Love Square™, they all will play quite prominent roles in the arc, and lots of, hrm, questions will be answered, hearts will be twisted, grand shows of pageantry will be had, hOrRiFiC tHiNgS will be experienced... basically par for the course for this game tbh. 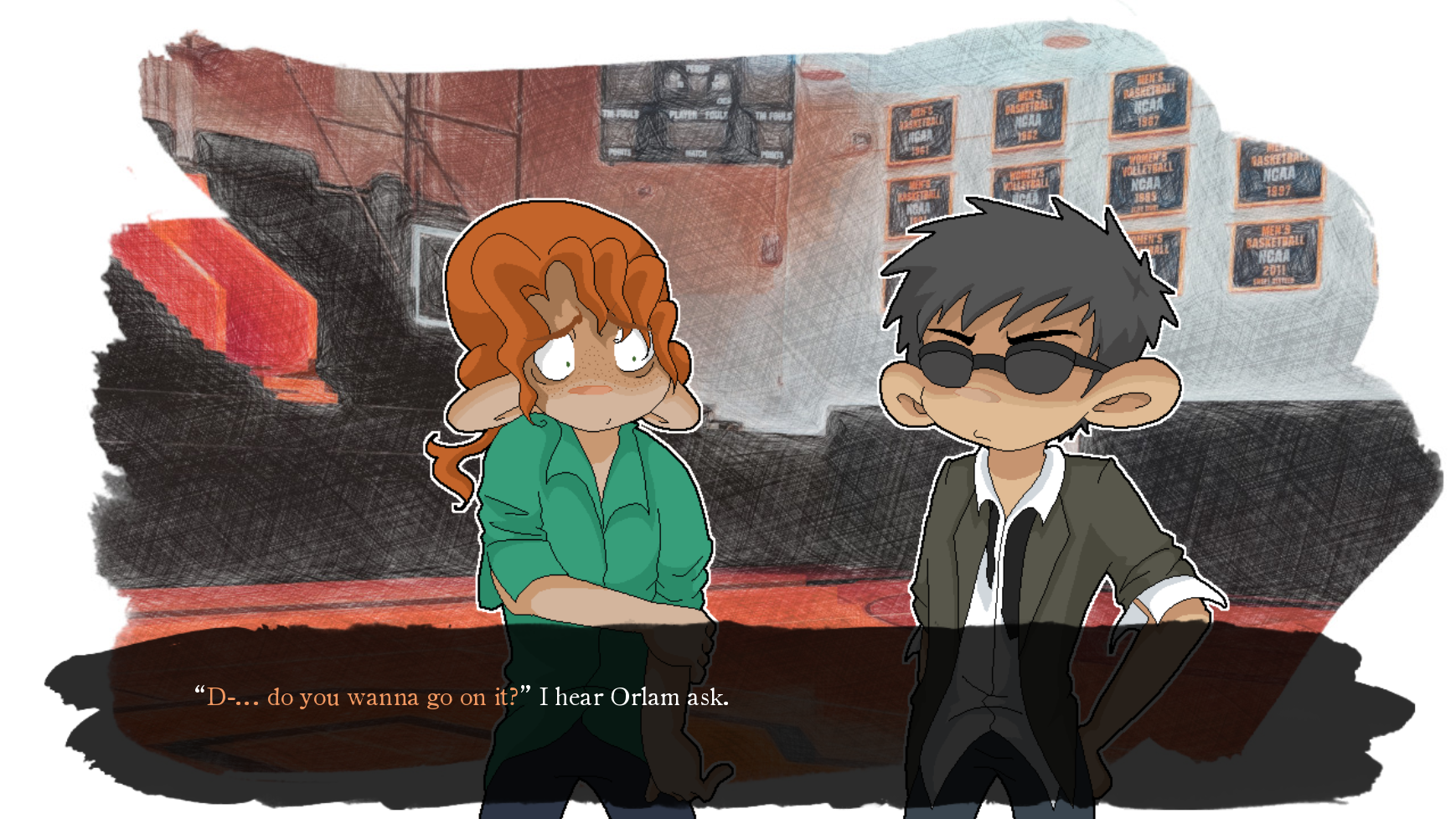 And All That Other Stuff

Some other random tidbits of info that I didn't know how else to categorize!

HEY! Did you know I love Orlam's rattail? Now you do.

Guess what! The Queer Games Bundle is running right now! It contains MORE GAMES THAN YOU CAN SHAKE A STICK AT.  The Game is also included! There are two different versions—a full-price one and a PWYW one—and it's a great way to support queer devs, so go check it out!

Should Carrot Get a Rattail?

This seems like a Good Life Decision, yea or nay? I think it would be Good. Let me know your thoughts. 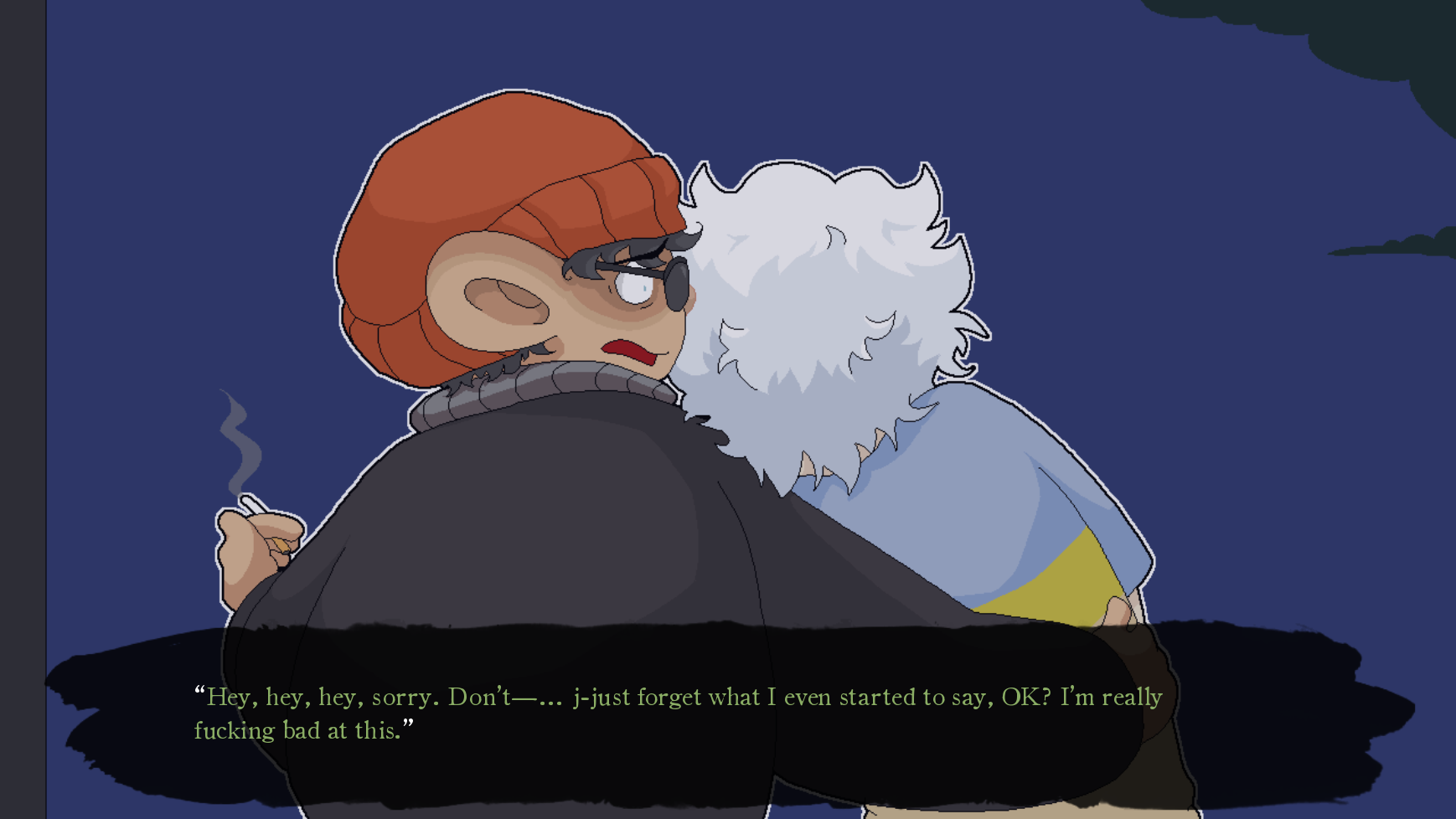 Have I mentioned that this arc is already making me weep?

Running Fingers Through a Rattail

HrrmmmMMMMMmmmm OK I think that's everything for now. At least that I can think of. I feel like there's tons going on lately and I've actually been quite busy but there's not so much to share yet as I don't really want to give away too much teehee.

Anyways, as always, check out my Twitter for more frequent updates than these sparsely paced brain dumps if that's even something that remotely interests you.

And I shall leave you with some recent art !

On a lighter note - make some merch out of these characters for God's sake! The world needs an Orlam keychain where his rattail is the chain. The world needs chibi stickers of the cast. MAKE SOMEONE INTO A MARKETABLE PLUSHIE YOU BRAVE, BRAVE CONTENT CREATOR!!

"Orlam keychain where his rattail is the chain" --> omgGGG I need this in my life!!! 😭

Also I would definitely die to have a plushie of any of the chars.  I think I would have reached the plateau of my existence. I feel like this would require a great deal of capital and/or a legion of thousands of fans to make happen though LOL

Just wanted to say that if Gidget turns out to be trans, as seems to be the leadup to Act 4, I just have to bring up a concern: does Gidget genuinely find she prefers being a woman rather than a man, or is it strictly because of Iggy? I can see the possibility of her transitioning before she actually gets canonically-gendered by the game, but right now, it seems like she just transitioned because Iggy had a very ill-considered outburst at her in which he tells her to "be more girly" and didn't try to apologize for it.

If "I only transitioned because of you, Iggy" turns out to be Gidget's sole reason for transitioning, that brings some rather uncomfortable implications should she stay a woman after the plot fully concludes. I can easily see a situation where she finds some reason for staying transitioned despite getting over Iggy (as much as she can) cheapening things because...well, it's like if someone sawed off one of their legs only because they thought it would make their love interest love them back, only to discover it didn't, but decide to not even consider getting an artificial leg because it was always wrong for them to have that leg. Unless the person is unable or unwilling to shake off the thing which made them think sawing off a leg for no good reason was a good idea in the first place, which is a perfectly-understandable reason (people aren't Vulkans, after all!), it feels like a cop-out narratively. Like, this is somehow the way it should be, even though the change wasn't made because the person didn't think they should have the leg.

I know my example comes off as strange, but it was the best analogue I could think of. I apologize if it or my comment comes off as crude, bigoted, or some other thing. If so, I apologize as it comes from a place of ignorance on LGBT matters - honestly, the best source on LGBT culture I've found comes from this game! I just want Gidget to be Gidget, whether that's as a trans woman, a gay man, or some other part of the spectrum.

EDIT: Ugh, it's so hard to get my feelings on this across. Made some edits to try and clarify my thinking, however it may be perceived.

AhhhHHHHHH... ok I feel like I need to clarify LOL This is getting into spoiler territory but I don't want you to have any potential bad feelings about the story/direction!!

Gidget is indeed trans, but they are AFAB. They are non-binary / transmasc. You are right that Iggy's involvement in everything is Not Good but more in the way that because of him, Gidget struggles to accept who they are, and so part of their story revolves around this. A lot of the experiences, feelings, mEnTaL sTrUgGlEs, etc. are based on things I have also gone through as someone who is also non-binary, particularly around acting a certain way because of friends, family, society, and someone you like (and wanting them to like you back, etc.).

So I hope that clears things up. I don't want to get into much more detail than that as then it'll really be going full into spoilers, but so many ppl have also already figured out where this is going that at least this point is not even complete spoilers anymore LOL

Ah, I see. Glad to hear the low-down on Gidget. Sorry for making you make the kinda-sorta open secret official. I just wanted to express my concerns is all.

(Also, I swear my "I just want Gidget to be Gidget" statement wasn't meant to be prophetic or anything. :D )

EDIT: Removed spoilers. To those who think they saw spoilers: